The Origins of the Summer BBQ

Previous
The Origins of the Summer BBQ

Synonymous with summer, the bbq cookout is truly a time-tested tradition that millions replicate every year. From veggies to sausages and even whole pig or lamb, where did barbecuing begin?

Rumored to have started in 1526 according to legend, barbecue was termed by a Spanish explorer observing how the Caribbean Taino people slow-cooked their food – largely fish – on a raised wooden platform. The Spaniards began calling it barbacoa and brought it throughout the reaches of the Spanish empire and beyond. In 1775, the word barbecue was entered into the Dictionary of English Language under the definition of “A term used in the West-Indies for dressing a hog whole; which, being split to the backbone, is laid flat upon a large gridiron, raised about two foot above a charcoal fire, with which it is surrounded.”

The American BBQ didn’t catch on until the 19th century, when a method of feeding large groups of people cheaply became popular across our developing nation, but especially in the south. It wasn’t until the first industrial ‘charcoal briquets’ allowed for everyday grilling that the American summer bbq became a household practice. The everyday chef could enjoy cooking outdoors while enjoying a meal. Considering no one wants to be freezing outside while cooking, late spring, summer, and early fall became the ideal season to bring out grills and enjoy the great outdoors, a meal, and the company of loved ones from neighbors to family and distant friends. 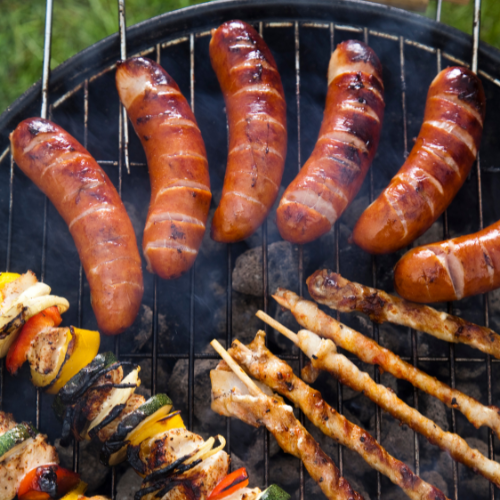 While originally fish was the star of the show, quickly overtaken by pork in the US, these days you may find many different things grilling on a nice summer day. From whole pork roasts to veggie patties, pineapples, burgers, and hot dogs, you can get creative with what to bring for a cookout. Don’t be shy about experimenting! When in doubt, it’s always great to go with the modern classics that offer delicious flavors. Hippey’s Meats from Denver Meat Company offers a variety of franks, bologna, and more to spice up your summer barbecue or a charcuterie board!