The Frank History of Hot Dogs

Previous Next
The Frank History of Hot Dogs

Despite the looming end to baseball season, hot dogs and ‘Franks’ are a cornerstone of American history. With the supposed origins of sausage as early as 700 BC, the modern hot dog can be traced back as far as 1484 with claims by both Vienna, Austria and Frankfurt, Germany (get it? Franks!) before making their way to America around the 1860s. Curious for more? Read on for hot, hot, hot dog history.

Believe it or not, sausages did not have their fluffy, sausage-sized buns for quite some time after their migration. Until 1904 hot dogs were served on traditional milk rolls, but the story goes that a Bavarian immigrant by the name of Anton Feuchtwanger was selling sausages held by hand on white gloves he provided. With the inevitable lack of glove returns, Anton asked his brother-in-law, a baker, to help. The baker created the long rolls we know today. A bun may not seem as important as the meat inside, but the ability to carry food easily without the mess of a poorly shaped bun meant the hotdog could skyrocket to handled fair-food stardom. 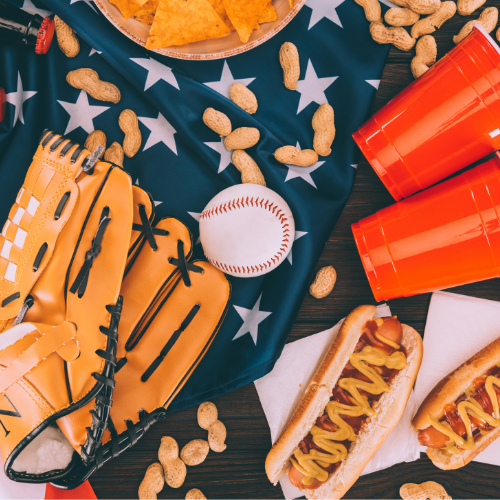 During a typical season, it’s estimated around 26 million hot dogs are eaten by ballpark fans. But how did the association between hot dogs and sports – especially baseball – become so ingrained in our culture? One story goes that in 1890, German immigrant Chris Von de The sold sausage in bread in the home of the St.Louis Browns, the ballpark he owned. Others claim Harry Stevens sold ‘dachshund sausages’ one cold day.

What’s In A Name

Despite contention on the exact events of its origins, one thing seems to be consistent in the hot dog name history – the wiener dog. Dachshunds dogs are the lovable long-bodied breed native to Germany, but soon the name also became synonymous with sausages. Some say that the name caught on as a joke. Others claim that in a cold 1901 April day, New York Journal cartoonist Tad Dorgan observed hot dog vendors selling their wares from their carts and, unsure of how to spell dachshund, opted for the simpler ‘dog’. Coupled with a matching cartoon in what was the times’ most viral form of media spread, the name quickly became mainstream.

With popularity, came variants to the German traditional meat on a bun with sauerkraut. Chicago dogs, Coney Island dogs, Italian hot dogs, Montreal, Michigan, and more added their toppings and recipes to make the dog uniquely theirs with as many variations as there are dog breeds.

To this day, hot dogs, franks, bratwursts, and more continue to evolve with different mouth-watering recipes. At Hippey’s Meats, we offer a variety of all-American, never frozen franks, bologna, and meat sticks from Andouille sausage to chili cheese and more. We even serve the PA staple – Scrapple.